Warning: foreach() argument must be of type array|object, string given in /var/www/wp-includes/class-wp-theme-json.php on line 1439
 What is Traumatic Loss? - Five Bodies Counseling
Skip to content

It is not uncommon to be deeply troubled when we experience the death of others to suicide, violence, industrial accidents, car crashes, natural disasters, terrorism, war and other dramatic, unexpected forms of death. The suddenness, and perhaps the horror or frightening nature, of the manner of death can often leave us feeling as if our lives have been turned upside down completely. In addition to more common experiences of grief, we may be plagued by memories or imaginations of what the deceased person’s experience of death was like. We may fall into shock, numbness, fear and ultimately, a crisis of meaning.

Some Signs of Traumatic Loss

Traumatic losses often give rise to emotions and feelings that are common in grief but can be significantly stronger in nature and duration than those experienced following losses that were more expected or “made more sense,” such as a person dying of old age or an illness that offered some preparation for the loss. These feelings may include:

A Crisis of Meaning 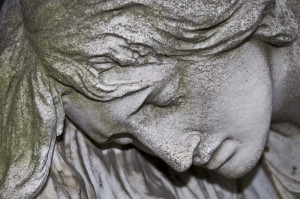 In grief, mourners often experience a “loss of meaning,” some way in which the order of the world is disrupted and must be mended again. This commonly occurs because we have, consciously or unconsciously, held an important “meaning” story related to that which we’ve lost, be it a person, a job or perhaps cherished items stolen from us by a house fire or theft. We feel the sudden void left by this vanishing, and a sense of meaninglessness can ensue.

When it comes to traumatic loss, the crisis of meaning can be profound. Trauma is identified as a special circumstance precisely because of its ability to undermine meaning, destroy one’s sense of “self” and cause entire belief systems to collapse.

Philosophers, psychologists and other “thinkers” aside, most of us don’t spend too much time identifying and evaluating the myriad assumptions and beliefs we hold that describe our view of “how the world is supposed to be.” We operate in a universe to which we have, usually largely unconsciously, ascribed a set of rules and orders.

A traumatic loss is often one that strips away the veil of our illusions and shows us a world that has much less structure and predictability in it than we’ve come to rely upon. Life can suddenly become terrifying — or just random and empty. Where we once we may have looked upon difficult situations with some sense of optimism, we may instead find ourselves understanding in a new light what Thomas Hobbes meant when he wrote in Leviathan that the worst of all human conditions is living with “continual fear and danger of violent death,” and describing the life of man as “solitary, poor, nasty, brutish and short.”

We may see with startling and cruel clarity that we can’t take anything for granted anymore, and sometimes this awareness initiates an existential crisis. This often manifests as profound wondering, with great heartache or cynicism, about the meaning and purpose of life and feeling reluctant to make close connection with others. People struggling with an existential crisis often say, to themselves or others, “What’s the point if we’re all just going to die anyway?”

This crisis may be understood as a significant challenge: To resolve it poorly can result in chronic, persistent feelings of depression or anxiety; to resolve it effectively means to come to acceptance of life’s unpredictability and learn to embrace the present moment, perhaps even allowing one to cherish life and relationships more than ever.

Although most of us have the innate ability to pass through grief and heal from loss, a crisis of meaning is one that often requires some help from others to successfully overcome. Counselors, pastors, spiritual mentors and thoughtful philosophical friends may all be of help in this situation.

When to Seek Help

If you find aspects of this article describe you or someone you love who has experienced traumatic loss, counseling may be an important part of recovery and healing. This may be especially the case when:

Many communities have support groups for people who have suffered loss from suicide or murder. Similarly, in the wake of natural or man-made disasters, many resources may be available in your community to deal with this, and a local chapter of the American Red Cross is often a good place to learn what’s available. Otherwise, seek a counselor who is skilled in the treatment of traumatic bereavement, which is a nuanced form of therapy that often falls beyond the bounds of both traditional grief counseling and traditional trauma therapies.

In Oregon, listings of support groups for those grieving deaths by suicide can be found here. For children and families dealing with traumatic bereavement, The Dougy Center has an excellent reputation. Grief & loss therapy groups in Portland can often be found among the up-to-date group therapy listings maintained by Portland Therapy Center.