“Is something wrong with me? I’m afraid I’m not grieving the right way.”

Such statements are common in my therapy practice, and every time I hear them, I feel pangs of frustration and sorrow. Grieving clients, confused by thoughts and feelings that may be unexpectedly profound, or surprisingly muted, often raise their concerns in the context of a popular measure: the “Five Stages of Grief.”

Based on the work of death and dying researcher Elisabeth Kubler-Ross in the late 1960s, many grieving Americans try to evaluate their progress through grief according to five stages: Denial, Anger, Bargaining, Depression, Acceptance.

Commonly, clients, family and friends alike tell me: “I don’t seem to fit the mold.” They may experience only half, perhaps even none, of the stages — and end up wondering if something is “wrong” with their grieving process.

The reason for this is simple: These “five stages” are widely misunderstood. Kubler-Ross’ research was conducted on people dying of incurable illness, not on people grieving the loss of loved ones. Though she later attempted to extrapolate her findings to grieving people, even Kubler-Ross admitted the idea had shortcomings: Learning that you are going to die is far different than learning someone you know has died. So for nearly 50 years, popular culture has sustained a misconception against which it is difficult, if not impossible, to measure oneself.

But people love maps. We want guides. Especially in times of pain, sorrow and confusion, we often want to hold fast to some kind of anchor, frightened of the unknown. Most of all, we want to know what we are “supposed to do,” whether things are “going to be OK,” and when it’s going to “be over.” And so these “five stages” have enduring appeal even when they prove themselves to be incongruent, as maps go, with the path many of us walk through bereavement.

Models developed in the decades after Kubler-Ross’ research have attempted to address this trouble, allowing for a more nuanced description. Examples include Worden’s Four Tasks of Mourning (accept the loss, work through the pain, adjust to the post-loss world, maintain a personal connection as one gets on with life) and numerous, various explorations of the dual-process models of mourning (loss-oriented behaviors and activities and restoration-oriented behaviors and activities).

These come closer to recognizing the highly subjective, idiosyncratic and personal experiences that are the true bedrock of grief. And yet, they may not go far enough, because people tend to regard them within narrow constructs of what is “supposed” to happen.

Truth be told, even the most experienced and highly specialized of grief counselors can’t tell a client what’s “supposed” to occur or on what timeline. Each of us is unique, and so are the ways we experience and process grief. 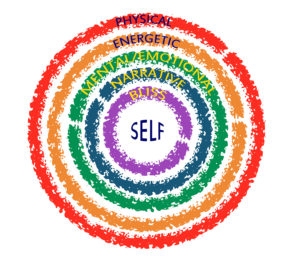 n light of that, I propose a different way to conceptualize grief, based not on a model of grieving itself but on a very ancient philosophical perspective on what it is to be Human. Originating in Vedanta, the philosophy of the Vedic texts of India that date back more than 3,000 years, each human being can be understood to be composed not of one body, but five. These five bodies, also called koshas or sheaths, surround the essential Self, that which gives spark to consciousness, and include: the physical body, the energetic body (prana, qi), the mental-emotional body, the body of belief systems, and the body of “bliss” or spirit/connection.

In grief, to pare this idea down to its fundamental bits, means we might experience grief as: physical symptoms, energetic fluctuations, mental-emotional processes, challenges to and alterations of personal belief systems, and spiritual/subtle body connection/disconnection.

For example, in our first body, the physical body, grief often manifests in muscle tension, headaches, feelings of heaviness, chest pain, digestive upset or loss of appetite, ailments of the lung, etc. Meanwhile, in the fourth body, the body of personal narrative and belief systems, we might reminisce deeply on the relationship we had with a person (or pet, or job, or marriage, etc.) now lost to us and create or re-define our personal meaning about that relationship — or we might experience a challenge to or loss of faith in a spiritual belief system that does not seem to give us the succor we seek when suffering.

Such disparate experiences within grief don’t conform to stages or timing, but rather reflect the multifaceted ways people can experience and attempt to cope with loss. They also represent the need for both care providers and the grieving to embrace a dynamic, flexible response to the varied aspects of grief, engaging self-care or therapeutic healing approaches that address the “symptoms” present.

When we can identify which of the five bodies such troubling experiences are occurring on, it becomes far easier to have an idea of what to do. Not what “should” be done, but rather, what might be helpful. The Five Bodies thus represent a kind of topographical relief map for grief, rather than a set of expectations or prescriptions.

Next week, on Thursday, July 7, I will elaborate on the Five Bodies of Grief concept during an interactive lecture at the quarterly meeting of the Northwest Association of Death Education and Bereavement Specialists, which meets at 11:30 a.m. at the Irvington Peace House, 2116 NE 18th Avenue, Portland.

The event includes a light luncheon buffet spread and an opportunity for networking with an interdisciplinary group of death and dying professionals, from counselors and hospice workers to funeral directors, death midwives, hospital chaplains, body and energy workers, artists and others who work in this multifaceted field. This lecture is also appropriate for lay persons wishing to learn more about self-awareness and self-care within the grieving process. NWADEBS members get in free; cost for non-members is $20. More info at www.nwadebs.org.

Previous Post: Terror & Murder on the Max: How to Offer Support in the Wake of a Community Trauma
Next Post: In Search of Awe: On the Psychological Motivations to Witness a Total Solar Eclipse